Inequality in adult life expectancy in low- and middle-income countries: The case of Indonesia

Nikkil Sudharsanan writes about the size and drivers of adult life expectancy disparities between socio-economic strata in Indonesia.

For over 40 years, researchers have found that high socioeconomic status (SES) individuals in high-income countries live longer than individuals with low SES. Although these findings have existed for decades, interest in mortality inequality has surged in the past few years and moved out of academia into the public eye. At first glance, it is not surprising to find that more advantaged individuals live longer; what is surprising is how large these differences are. Studies from the United States, England, and Finland find 6-10 year differences in adult life expectancy between high and low SES individuals. To provide context for how large these differences are: 10 years of life expectancy is the difference between the United States in 1960 and 2015.

What is driving these differences? The studies that have tried to figure this out attribute a large portion of SES differences to higher levels of unhealthy behaviors among low SES individuals relative to those with higher SES. For example, in high-income countries, poorer and less educated individuals are more likely to smoke, drink heavily, and are less likely to seek health care. These patterns don’t necessarily lay blame on the poor; a large literature has shown that these behaviors were likely shaped by the social and economic circumstances faced by poor individuals and families.

Unfortunately, comparatively few studies have looked at this relationship in low- and middle-income countries (LMICs). Intuitively, many people view the poor in LMICs as an exceptionally disadvantaged group – leading us to believe that SES differences in life expectancy must be just as large, if not larger, in LMICs. In fact, I held this same view when I started working on Indonesia. But is this intuition correct?

The answer is: not quite. Recall that studies of mortality inequality in high-income countries attribute a large portion of the differences to social differences in unhealthy behaviors; however, in many LMICs, unhealthy behaviors don’t pattern strongly across SES. In some cases, they actually go in the opposite direction! Obesity, for example tends to be higher among the rich than the poor. In countries like Indonesia, smoking and hypertension are highly prevalent across all socioeconomic strata. Putting all these behaviors together might actually result in less inequality in life expectancy in LMICs compared to high-income countries.

In my paper, I look at this specific question using data on Indonesia. Jumping right in, Figure 1 shows SES differences in life expectancy at age 30 for men across two measures of SES: (1) consumption – a proxy for income in LMICs and (2) an asset-based wealth index. So do poor men live longer? If you define SES based on what households own (asset-index), then poor men have a life expectancy that is about 3.5 years less than rich men. However, if you define poverty based on what a household spends (consumption), there really doesn’t appear to be any correlation… The story is quite different for Indonesian women (Figure 2). For women, inequality is much smaller, only around 2 years between the rich and poor. In contrast to men, differences in adult life expectancy are more pronounced when looking at household consumption, instead of wealth.

The big takeaway from these findings is that adult mortality inequality in Indonesia is much smaller than would be expected based on findings from high-income countries. Most people, including myself, expected to find huge inequalities in a country like Indonesia. To many of my colleagues and mentors, these findings were unsettling.

In my paper, I argue that this is actually not that surprising. If you look at how health behaviors pattern across SES (Figures 3 and 4),  there is little evidence that the poor are more disadvantaged in terms of unhealthy behaviors. Obesity rates are very low and actually slightly higher among upper SES groups; hypertension is virtually flat across SES; and smoking (for men) is only slightly lower among the rich. So if behaviors are thought to be driving the large inequalities in high-income countries, it is actually not that surprising that adult mortality inequalities are smaller in Indonesia, since SES inequalities in health behaviors are much weaker. This isn’t all good news though: although inequality is smaller in Indonesia, the 2-4 year differences I find are still substantial and need more investigation. Inequalities in access to care and resources may be the primary culprit behind mortality inequality in a context where health behaviors are not to blame. 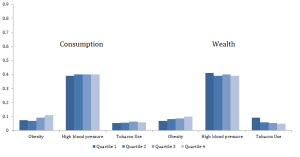 One of the biggest things I learned from this project is that insights on the causes and size of health inequalities drawn from studies of high-income countries may not translate to LMICs. As a follow up, my colleagues and I are now working to see if the results I found in Indonesia can be seen in other LMICs as well. The question that is nagging us is: as LMICs develop and become more similar to high-income countries, will inequalities in mortality emerge, or are LMICs on a fundamentally different trajectory?

Nikkil Sudharsanan completed a PhD in Demography and an MA in Statistics at the University of Pennsylvania. Starting in September 2017, he will be a David E. Bell Postdoctoral Fellow at the Harvard School of Public Health. This post was based on Nikkil’s recently published paper in the Journals of Gerontology: Series B, which can be found here.