Lost in Translation: Language Segregation among Hispanics in the United States?

August 15, 2018 · by demotrendsblog · in Migration and geography, Research spotlight · Leave a comment

Over 50 million Hispanics live in the United States. One-quarter speak English and no other language, and another 40% speak English very well. The other 18 million Hispanics are split between those who speak English well (38%), not well (37%), and not at all (26%). Remarkably, we know little about where Hispanics with divergent English language skills live. It is possible Hispanics live mostly side-by-side in the same neighborhoods (or under the same roof) regardless of English language skills. But what if Hispanics who speak little or no English instead live apart from other Hispanics? Answering this question requires reviving a neglected strand of demographic research: language segregation. The large, growing, and spatially dispersed Hispanic population affords us the opportunity to study language segregation across a wide range of neighborhoods in the United States.

In this post, I outline the benefits of studying language segregation and discuss the reasons why researchers have rarely studied this topic in the United States. I then offer preliminary findings and discuss promising directions for demographic research.

The scarcity of language segregation research in the United States, and its causes

Firstly, while segregation has become a dominant topic in demographic research, segregation research has focused on residential segregation by race, ethnicity, and nativity, rather than language. As a result, we have scant evidence about the residential segregation of Hispanics according to their different linguistic backgrounds. This gap in research is unfortunate because there are many reasons to suspect that language use is linked to residential segregation, especially given that mass immigration from non-English speaking countries has ballooned in recent years. Indeed, limited English proficiency is related to negative social outcomes, and the uneven concentration of language use could affect individuals and their neighborhoods. For example, scholars have documented how linguistic isolation predicts poverty, and secondary school students attaining limited English language skills lag behind others in academic outcomes. At the same time, one of the few studies of the direct link between language use and segregation by nativity concludes that limited English proficiency may very well be caused by—not just related to—the spatial segregation of foreign-born groups.

Secondly, within language-use research, individual-level and household-level perspectives are dominant. Unfortunately, this means that the contextual character of language use—that is, the location and distribution of languages spoken—has ceded center stage to language use as personal and familial phenomena. As a result, we know little about whether integration is evenly shared within populations with divergent language skills.

Language segregation within the US Hispanic population

The connection between language and segregation once warranted the full attention of demographic scholarship. Since then, with one or two notable exceptions, very little scholarship exists on US language segregation.

The literature on segregation and language use has yet to examine demographic patterns within a minority group. In the final section of this post, I present some evidence that outlines the contours of this “missing piece” – within-group variation among the US Hispanic population. Within-group segregation patterns reveal whether linguistic sub-groups generally live in similar neighborhoods. If not, leveraging the spatial dimensions of language use can uncover which Hispanic sub-groups live apart from other Hispanics.

Here I focus my attention on language segregation within the Hispanic population. I use a question on language use from the American Community Survey. I differentiate groups of Hispanics who say they only speak English or that they speak English very well, well, not well, or not at all. Language segregation is displayed on the Y axis in Figure 1 as the mean dissimilarity score between one group of Hispanics (whose reported language use is closer to English language proficiency) and a second group of Hispanics (whose language use is closer to not speaking English). Segregation reflects how many Hispanics would have to move to achieve even spatial distribution across census tracts within a county. Dissimilarity equals 1.0 when each tract contains only one group (i.e., total segregation), and it equals zero when both groups are present in each tract in the same proportion as the county (i.e., no segregation).

In Figure 1, the first plot (top left) compares the percent of a county’s Hispanic population who only speaks English (X axis) to segregation (Y axis) between two groups: (a) Hispanics who only speak English and (b) all other Hispanics. The relationship is essentially flat. Based on this pattern alone, we might conclude Hispanic language segregation is no worse in places where Hispanic, English-only speakers are prevalent than counties where they are few and far between. However, the patterns change when we adjust the language use threshold of comparison within the Hispanic population. The second plot (top right) calculates segregation between (a) Hispanics who either only speak English or speak it very well and (b) all other Hispanics (i.e., who speak English well, not well, or not at all). In this case, the relationship is slightly positive. A similar pattern (bottom left) holds if we calculate segregation between (a) Hispanics who speak only English, speak it very well, or well and (b) all other Hispanics.

The positive relationship is strongest (bottom right) if we calculate segregation between (a) Hispanics who do not speak English and (b) all other Hispanics. The fourth set of dissimilarity scores are generally higher than the rest: 0.52 median dissimilarity (bottom right) compared to 0.31-0.37 for the other Hispanic group classifications among the same counties. In counties where the proportion of Hispanics who only speak English is high, language segregation is pronounced. In sum, non-English-speaking Hispanics tend to live apart from other Hispanics.

In addition to patterns above, certain states have much higher language segregation between Hispanics who speak no English and other Hispanics. The mean segregation score among counties is relatively low in some states with large immigrant populations (0.36 in Texas; 0.38 in California) but not all (0.53 in Florida; 0.60 in Illinois; 0.67 in New York). Mean segregation across counties is high—about half a standard deviation above the national average—in the Southeast (0.63-0.72 in Alabama, Kentucky, Louisiana, South Carolina, Tennessee, and Virginia) the Midwest (0.62-0.78 in Indiana, Michigan, Missouri, and Ohio), and the mid-Atlantic (0.66-0.67 in Maryland and Pennsylvania). These figures suggest language segregation only partially reflects past immigrant settlement to “established” versus “new destination” states.

Looking toward the future.

A renewed focus on Hispanic settlement by language background is long overdue. The initial evidence presented here suggests that Hispanics who speak no English end up in neighborhoods apart from their Hispanic counterparts who are proficient English-speakers. Since they tend to live in different contexts, they inhabit contrasting social worlds. On top of that, one-third of Hispanics (nearly 18 million people) speak entirely different languages: 13 million speak only English while nearly 4 million do not speak English at all. We know linguistic gaps leave room for experiences to get lost in translation. But we do not yet know how these gaps correspond to Hispanic settlement; how language segregation trends among Hispanics have changed over time; or whether non-English-speaking Hispanics are left behind in neighborhoods which are also residentially segregated from non-Hispanic groups. The time has come to put segregation research more deliberately in conversation with language scholarship and to translate people’s lived experiences into revealing demographic research. 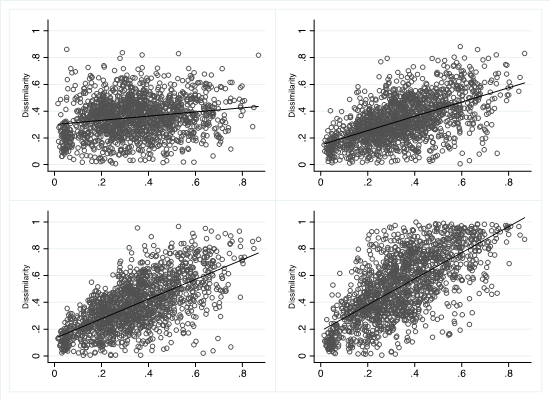 Source: Author’s calculations of dissimilarity (census tracts nested within counties) of the American Community Survey 2011-2015, 5-year summary file. Each plot splits the Hispanic population into two groups based on thresholds of English language use. Plots include counties with over 1,000 Hispanics in the US (including Puerto Rico) where dissimilarity is above zero (N = 1,536). The Y axis calculates dissimilarity scores across four types of comparisons, and the X axis plots percent of a county’s Hispanic population who only speaks English.

Juan Manuel Pedroza (Sociology Ph.D., Stanford University) is an Assistant Professor of sociology at the University of California, Santa Cruz where he studies the changing landscape of immigration in the United States. ​https://SocialDemography.XYZ features his immigration and social demographic research.