Mind the gap: the compass of foregone fertility in Europe

March 17, 2016 · by acarioli · in Families and relationships, Fertility, Uncategorized · 6 Comments

“You can’t always get what you want” sang Mick Jagger in 1969. Four decades and a whole fertility transition later, European women wishing to form a family are well aware of the meaning of these lyrics. Over these four decades, desired family size has not changed much, with a predominant preference for two children, while actual family size has fallen considerably in most European countries. Indeed, if women’s desired family size was always fulfilled, then fertility would be much higher than current levels, and close to or above replacement. As shown by total fertility rates, today’s picture is quite different. Observed fertility is well below desired fertility, meaning that women seldom achieve their family size goals, and more worryingly, the persistence of such low fertility may be ‘downsizing’ childbearing intentions so that they more closely fit observed fertility, thus leading to a ‘low-fertility trap’ (Lutz et al. 2006) .

How can this gap be quantified and broken down to understand its dynamics? How does it differ across European countries?

Drawing from Bongaarts (1998) framework, the relationship between desired and observed fertility can be rewritten as dependent on involuntary factors and competing preferences, after correcting fertility rates for tempo effects. Furthermore, we extend this framework to decompose involuntary factors between ‘strictly involuntary’ and ‘waiting time’. The former covers the effect of biological characteristics and union disruption, while the latter accounts for the time of contraception use at the beginning of a union by women wishing to have children. 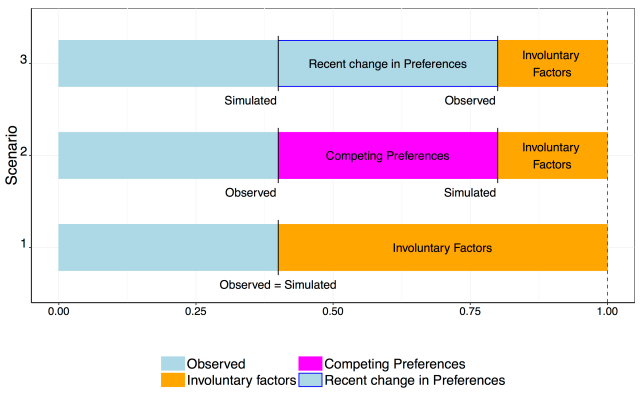 Variation of foregone fertility across Europe

The decomposition of foregone fertility into factors reveals an interesting division of Europe between East and West, which is present not only for total fertility but also for different parities. Indeed, involuntary factors appear to be the chief culprit when accounting for foregone fertility across Western Europe, both for total fertility (see Fig. 2) and the transition to the first birth (see Fig. 3), while competing preferences appear to play a lesser role. Conversely, Eastern Europe sees a much more predominant impact of competing preferences, although the effect of involuntary factors is not negligible. Countries like Estonia, Slovenia, and Bulgaria experience a predominant role of competing preferences, which explain almost 70% of desired fertility loss. On the other hand, Finland and Italy, two countries with very different fertility profiles in the 1990s (1.8 and 1.2 children per woman respectively),[1] register the highest loss of desired fertility to involuntary factors (see Fig. 2).

The reformulation of involuntary factors allows to distinguish between the effect of strictly involuntary factors (biological characteristics and union dissolution) and the postponement effect on fertility due to the use of contraception at the beginning of a union, labelled ‘waiting time’. Interestingly, the effect of waiting time appears to be quite small for most Eastern European countries, suggesting that union formation is still strictly connected to an (almost) immediate family formation, especially in this context (the 1990s) when mean age at childbearing was on average two to three years lower[2] and cohabitation patterns were not as widespread as today. However, its effect on fertility in Western European countries is larger, especially for Italy, where it is responsible for 30% of the relinquished first births.

The study of desired fertility offers an insightful view of the mechanisms behind family formation. Also, the decomposition of childbearing into dimensions of foregone fertility can shed new light about the impact of country specific settings on women’s decision-making. Indeed, the dynamics behind women’s unrealized fertility desires can vary considerably across countries and by parity. This is an important point to consider in order to devise successful family policies. Indeed, childless women who desire to have children undergo the adverse effect of postponement and competing preferences quite differently, and to very different extents, depending on where in Europe they live.

Figure 2: Simulation results for Total Fertility Rate showing the percentage of realized and simulated fertility with respect to desired fertility (set at =1) 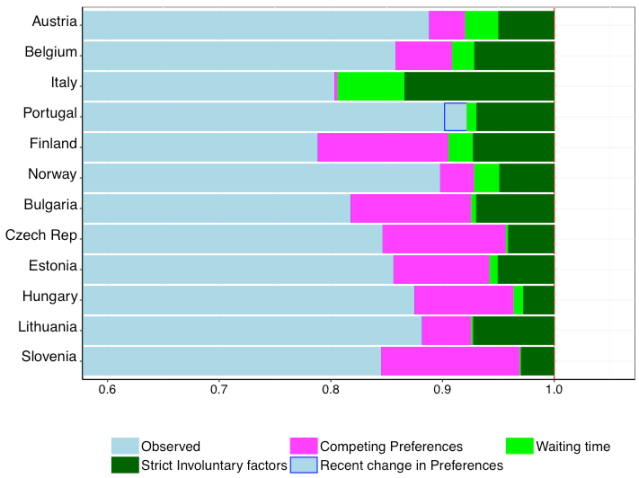 Figure 3: Simulation results for the progression to first birth showing the percentage of realized and simulated fertility with respect to desired fertility (set at=1)

[2] Source: Human Fertility database comparison between the average for years 1995-1996 and 2012-2014. The raise in mean age at childbearing in Eastern Europe across the last two decades gained momentum leading to a higher increase (~3 years) than in Western Europe, although its value is still lower.

This post draws from the study “Mind the gap: the role of involuntary factors in the difference between actual and intended fertility in 12 European countries. A microsimulation model” by Alessandra Carioli (NIDI and RUG) and Daniel Devolder (CED, Universitat Autonoma de Barcelona).