In less than a decade, women born in 1975 will become the most infertile of all cohorts born in Spain in the past 130 years. In all likelihood, one in four women born in 1975 won’t have had children when she turns fifty. Part of this childlessness is due to frustration of the reproductive lives of these women and their partners. In societies like Spain, which are concerned about population ageing, the decline of the working-age population, and the sustainability of pensions and a universal health system, it is surprising that there is so little discussion of the fact that one in every four women will be childless. In this article,  Albert Esteve, Daniel Devolder, and Andreu Domingo provide new insights about childlessness in Spain, drawn from their recent research published in Perspectives Demogràfiques.

Increasing childlessness
The progressive fall of fertility in Spain was only interrupted in the baby boom. The completed fertility of women born in Spain fell from 3.15 children for women born in in 1900 to 1.49 children for women born in 1969. Generation after generation, women have been having fewer children, except for those born between 1930 and 1943. These ‘baby boomers’ sustained an average of 2.5 children per woman, with some generations even higher than this figure (for example with 2.64 children per woman in the generation born in 1938). Even for these generations around 10% of women remained childless throughout their lives. However, the level of childlessness that is predicted for women born in the second half of the 1970s is unprecedented in Spain, and may reach as high as 30%.

Figure 1: Evolution of childlessness and completed fertility of women born in Spain between 1886 and 1980. Source: CED using data on Natural Population Movement and the Population Census (INE, National Statistics Institute)

To find levels of childlessness that compare with those of the present, we need to consider generations of women born before 1922. Even then, these earlier figures never exceeded 25% of women being childless. The proportion of childless women starts to fall between the generation of 1922 and that of 1944 (11.8% of childless women), after which it steadily increases.

There are a variety of reasons why women remain childless, although it is difficult to quantify their relative importance for explaining childlessness (Devolder 2015). Demographers often identify five main explanations. First, there are some women who, for biological reasons, are unable to have children. In medical terminology, this is called primary sterility. Second, there are fecund women who don’t want to have children, a decision they stand by throughout their lives. This is referred to as voluntary childlessness. Third, are the women who can and would like to have children but don’t plan to do so because they believe that they are too young. Since this is determined in accordance with the socially acceptable age for becoming a mother, this is referred to as normative childlessness. Fourth, are the women of a socially acceptable age for motherhood, who can and would like to have children, but who opt to wait for some years because they don’t enjoy the right family conditions and/or optimal material circumstances for taking on the costs of reproduction. This is called transitory childlessness. Fifth and finally, are the women who, whether or not they attain the circumstances they deem sufficient, decide to have children but can’t get pregnant owing to age-related low fecundity or acquired sterility, which is increasingly the case after 35 years of age.

Which are the most important of these reasons to explain the current situation in Spain? With the (very scant) data available in Spain it isn’t possible to give a definitive answer to this question but at least we can discard several hypotheses. Primary sterility has a low, constant rate of about 2% and doesn’t explain Spain’s high childlessness rates. Moreover, assisted reproduction technology has contributed towards reducing the levels of primary and acquired sterility. Then again, women who don’t want to have children and who stay with this decision throughout their fertile life are a minority, always less than 5% (according to data obtained from the most recent fertility surveys published in Spain). In fact, Spain is one of European countries with the greatest gap between the number of children desired and those actually born (Castro-Martín, Seiz-Puyuelo 2014). 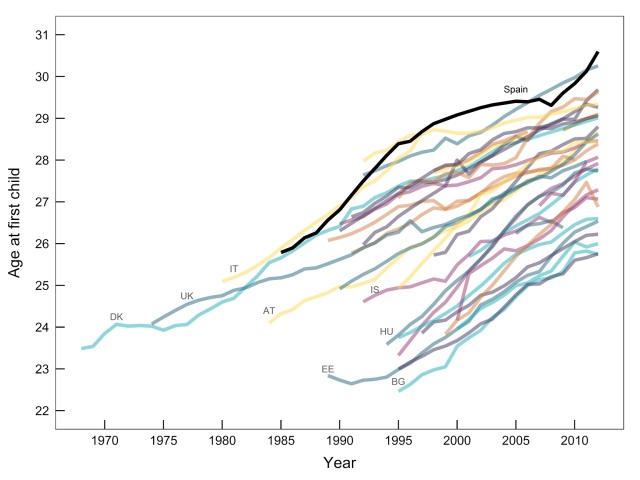 Figure 2: Evolution of the age at the birth of the first child in 35 European countries, 1970-2012. Source: CED using Eurostat data.

In fact, all the data that we have seems to suggest that today’s childlessness rates in Spain are linked with mothers postponing the age of their first birth. Spain heads the list for delayed maternity in Europe (Figure 2), presently showing the highest average age of first birth in the world. Between 1985 and 2012 the average age of Spanish women at the time of the birth of their first child rose from 26 to 30.5 years. In practice, this increase reveals a displacement in the window of years in which women plan to have children, situating it at an age level where fertility quickly declines.

As a society, we should consider the assignation of resources in our lives and incorporate the raising of children in youthful years as one more pillar of the welfare state, knowing – as we do know – that we are facing growing frustration for many citizens in relation to their childbearing opportunities. Trying to fit together the demands of work, life and childbearing has become difficult for many women and men. It also seems clear that it is impossible to obtain a family life based on the assumption of egalitarian gender values in the absence of institutional support. By improving our understanding of childlessness and postponement, we can suggest who needs this support, and when, over the long reproductive life course, they are most likely to need it.

Albert Esteve, Daniel Devolder, and Andreu Domingo are researchers at the Centre d’Estudis Demogràfics of the Universitat Autònoma de Barcelona. This post is based on a longer piece published in Perspectives Demogràfiques. If you have any questions or would like to discuss any of this further, then please contact demog@ced.uab.es

← Infrastructural Challenges in Maternity and Newborn Care in Rural Kenya
Mind the gap: the compass of foregone fertility in Europe →