The Land of Babushka

This is a post by Ilya Kashnitsky, which discusses his recent research on population dynamics in Russia.

There are some Russian words that are commonly known across the world. One of them is “babushka”, meaning “granny”, which in some contexts can simply be translated as “old lady”. In fact, this word may become even more well-known, particularly among demographers, because it seems that Russia is now a land of old ladies.

First, to put this statement into context, we can look at a map of Russia based on the latest Census data (Russian Census 2010 – unpublished data), which shows the median age of the population at sub-regional (municipality) level.

A general glance at the map (Figure 1) reveals that some of the regions look extremely young (green on the map). There are basically two types of young region. (1) The regions of Northern Caucasus and Southern Siberia are known for their lag in demographic development, compared with the rest of the country. The levels of fertility and mortality are still quite high there, and population structure looks traditional. (2) The relatively young population of Siberia and the Far East is of a different type. These areas were forcibly populated in 1970s when rich oil and gas fields were discovered there. Those who migrated in the 1970s simply haven’t had enough time to grow old in the destination regions. Thus, the share of old people in these Siberian regions is very small and their populations are very young. 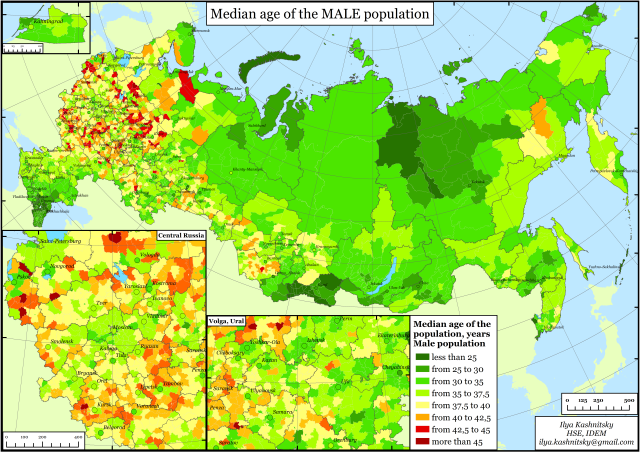 From demographic point of view, Russia is notorious for its huge difference in male and female mortality. Life expectancy at birth is almost 12 years longer for women (74.8) than it is for men (63.0). (HMD 2010)

The crucial explanation is the extremely high level of mortality among working-age Russian men. Computations based on HMD data (2010) show that the probability of a Russian man surviving from 20 to 60 is just 0.64. For women the probability is 0.87. To compare, the same probabilities for males in some developed countries are: France (0.89), Japan (0.92), US (0.87), UK (0.91). 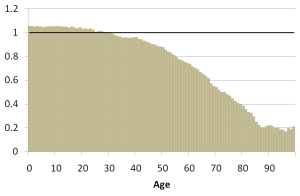 There are numerous explanations for why Russian men are dying so rapidly in the working ages, almost all of which are more or less connected to alcohol consumption (see relevant papers by E. M. Andreev and V. M. Shkolnikov). Nevertheless, the result of male mortality in Russia is clearly visible in the age-specific sex ratio (Figure 3). By the age of 29, the number of men and women becomes equivalent. But after this the sex ratio falls rapidly, and in the oldest age group (85+) there are roughly five times more women than men in Russia.

The extremely high level of male mortality in Russia has affected most municipalities. Looking at maps of median age separately for men and women gives a clear indication that this is not just restricted to any one area – not just Western regions or those that are more urban. Indeed, when combined with a history of large-scale out-migration from remoter areas to the central cities of regions, the land of babushka may be an even more relevant description for the remote areas of Russia.

Ilya Kashnitsky is a postgraduate demography student at the University of Groningen in the Netherlands and a Research Intern at Higher School of Economics in Russia. His research focuses on migration, urbanization, and human geography. If you have any comments, or would like to discuss this article further, please contact: ilya.kashnitsky@gmail.com.

← Exploring the limits of household surveys in Africa
The challenges in researching the demographic consequences of conflict: Reflections on the Sierra Leonean civil war, 1991-2002 →