March 9, 2020 · by ashiramenashe · in Migration and geography, Population composition · Leave a comment

Population age composition is recognized as determining numerous aspects of society – from fertility rates to pension policies. One type of population age structure, a youth bulge, has its own particular effects. A youth bulge generally refers to a population with a high proportion of 15-24 year olds. A positive effect of a youth bulge is having fewer dependent children and elderly people in the population, as compared with the working population. This allows for economic growth through boosted productivity and savings. Thus, a high proportion of young adults in the population can contribute to a demographic dividend, under the right socio-political and economic conditions. These conditions include opportunities for schooling, job availability and accessible health care. Without such conditions, a youth bulge may have negative effects, and even lead to conflict. While youth bulges are not direct causes of conflict, they can interact with other conditions, such as high unemployment, or a mal-distribution of resources, and contribute to a higher risk of conflict, including civil war.

Most often the youth bulge is examined from a national perspective, but a rural/urban perspective provides important insights. In general, rural populations are younger than urban populations in sub-Saharan Africa, largely due to higher fertility. Yet, as seen in Figure 1, where four countries’ age structures are depicted, there is also considerable heterogeneity between countries. Angola and Senegal have the same level of urbanisation with 43% of population living in the urban sector in 2015, but their rural and urban age structures differ, most likely a consequence of a stalled fertility transition in Angola resulting in high levels of urban total fertility and similar age structures in both sectors. Ethiopia has a narrower ‘base’ (i.e. a smaller proportion of children) in its urban pyramid (like Senegal), typical of a population where fertility and mortality have declined, and the potential for a demographic dividend is high. Yet, because the proportion of the population living in the urban sector in Ethiopia is low, at around 20%, such a dividend may be weak. Economic growth from the urban sector could be boosted by higher rural-to-urban migration of young adults (though this could also work in the other direction – economic growth could stimulate more rural-to-urban migration). Indeed, migration seems to at least partially contribute to the urban age structure seen in Zimbabwe where nearly 40% of the male urban population is between ages 20-34. 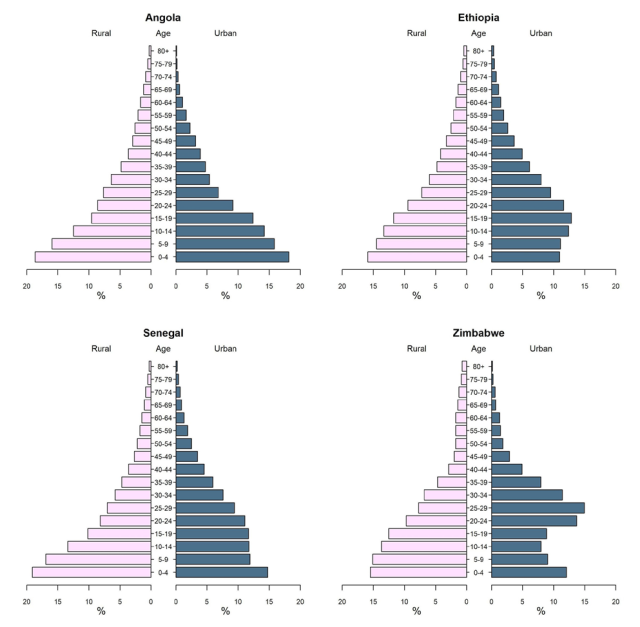 Notwithstanding the heterogeneity between countries in sub-Saharan Africa, the urban age structure often features a youth bulge, both due to the process of urbanisation, and to the varying paces of demographic transition by rural/urban sector.  Because the youth bulge is currently mostly an urban phenomenon, concern over negative effects of a youth bulge is primarily an urban concern. However, my recent article suggests that a male urban youth bulge does not increase the likelihood of urban conflict. Moreover, even when youth bulges composed of rural-to-urban migrants are considered, no relationship with social conflict is found. On the other hand, I found that female youth bulges seem to have an effect on conflict in sub-Saharan Africa. Urban female youth bulges increase the likelihood of social conflict, particularly when they are driven by non-migrant women. These results suggest that women should not be neglected when examining conflict. Similarly, women should be given more attention in order to realise the benefits of a demographic dividend. Women often have lower education, lower labour force participation and suffer gender discrimination, so the potential of an economic boost is lost even if there is a large youth bulge and few dependents in the population. Mostly, women are better off in the urban sector, since they have better access to higher education and less traditional expectations, among other reasons.  Therefore, it is likely that countries that invest in women may reap a larger dividend from a female youth bulge in the urban sector.

← Population change in Georgia from 1990 to 2018
Armed conflict and family formation: How the Nagorno-Karabakh conflict affected fertility and early marriage in Azerbaijan →