November 21, 2019 · by demotrendsblog · in Ageing, Families and relationships, Research spotlight · Leave a comment

This blog post is written by Sarmitė Mikulionienė and Gražina Rapolienė about the outcomes of ageing in Lithuania.

Lithuania is an ageing country, therefore social integration of daily practices and issues related to living arrangements have become an important research and policy agenda of the country. We will introduce the demographic profile of Lithuania’s older population (60+), and their perceived welfare and social risks emerging across the life course, such as social exclusion, isolation and loneliness.

In terms of demographic ageing, Lithuania is similar to the rest of Europe: in 2017, the share of population aged 65 and over was 19.3 %, being close to the EU-28 average. Over the past four decades, Lithuania witnessed fundamental changes in the population’s age structure: the share of population aged 65 and over increased by 76 % between 1974 and 2017. In Lithuania, the process of demographic ageing was driven by falling birth rates. To a certain extent, the number of older people also increased due to mortality declines / gains in life expectancy. Although average life expectancy among the oldest old also increased in Lithuania, the contribution of this indicator to population ageing can be regarded as low, taking into account the fact that the population aged 85 and over is only 9.4 % of the total number of people aged 65 and over in Lithuania, and this remains among the lowest in Europe. During the last two decades, as compared to previous ones, intensified population ageing was strongly influenced by migration flows that have dramatically changed: Lithuania was a country of immigration in Soviet times (the flow of incoming population was greater than the outflow), but it became a country of emigration (the number of emigrants exceeds immigrants) after the re-establishment of the State in 1990.

In general, living alone is not very common among the Lithuanian population. In 2011, only 13.2 % of the total Lithuanian population lived alone (being the 16th country among the EU Member States). However, looking at the proportion of the 65-and-over population living alone, Lithuania is ranked second after Denmark (45.6 %) in 2017 (Figure 1). Moreover, the percentage of older adults living alone steadily increased in Lithuania over several decades: in 1989, every fourth adult (25.8 %) aged 65 and over lived alone, in 2001 this share was 29.8 %, and reached a third (33.1 %) in 2011. 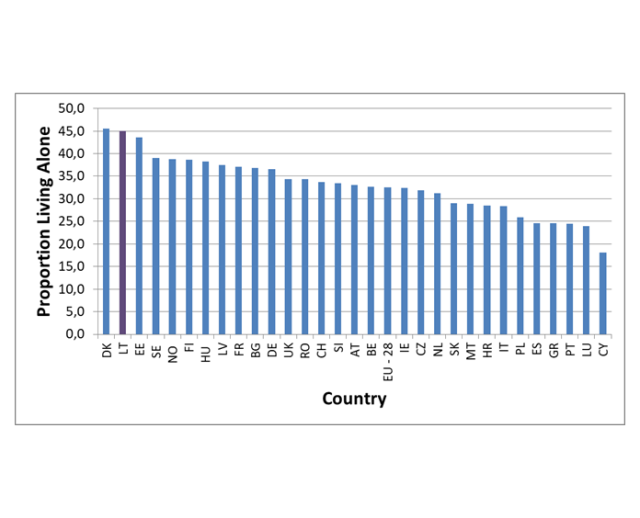 Living in single-person households is a particular characteristic of older women. For example, in 2011, every second Lithuanian women (47.8 %) aged between 80 and 84 lived alone. The percentage of men living alone was substantially lower for the same age group – only a fourth (26 %). Accordingly, ageing alone is becoming an increasingly common experience in older age leading to increased levels of loneliness (Figure 2). 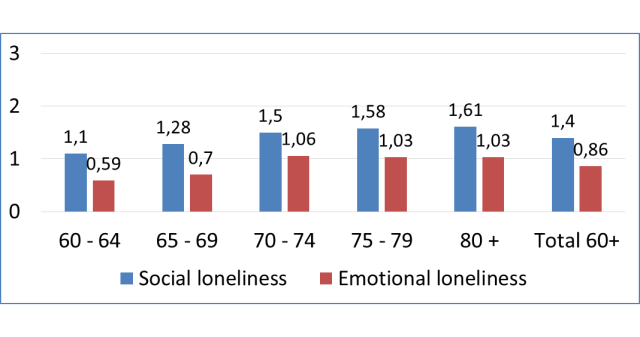 Older people themselves believe living alone gives them freedom, autonomy and helps to maintain good relationships with family due to living at distance. However, as our qualitative research (N=27) shows such a form of living may often not be deliberately chosen, but rather imposed by circumstances, i.e. the death of a spouse, divorce or being single or living with parents until their death. Growing loneliness, declining health, increasing feeling of insecurity, anxiety about the future, and difficulties in daily living make older adults living alone consider different alternatives of living with someone: moving to their children’s home or to care homes, getting married or moving in with a partner, long-term dwelling lease together with care obligations, etc. However, alternatives are eventually rejected as unsatisfactory and living alone is often accepted as inevitability. It is of note that Lithuanian older people interviewed for our research project show a lack of understanding of personal empowerment, putting their needs after those of others or underestimating them on account of decreased comfort levels of others. Such disempowerment is also influenced by the stigmatisation of ageing and internalisation of age stereotypes, prompting older people to stand aside to avoid causing problems to others.

Despite the fragmentary nature of the empirical indicators that characterise social exclusion, research allows us to at least draw a dotted line identifying the dimensions that pose social exclusion risks for older people in Lithuania, especially those living alone. In many cases, it is the material resources of older people in Lithuania, especially of those living alone, that have to be identified as posing a risk to their social inclusion. Numerous important parameters of the spatial domain, such as housing amenities, public transport infrastructure, safety at the place of residence, etc. also show that a large part of older people in Lithuania is at a disadvantage and may experience social exclusion due to environmental barriers. The digital divide among older people is still above the average in the country, although this factor will weaken with every upcoming generation of seniors.

Our research has identified quite common manifestations of ageism in public life experienced by older people, especially those living alone. In scientific literature, such manifestations are viewed as discouraging barriers preventing older people from meaningful involvement in society. Our research has revealed that frequency of communication with other people for many older people in Lithuania is actually teetering on the edge of what many researchers consider as social isolation as it does not even reach one person a day (9 people in 10 days) for those living alone, while for those living with others is slightly higher (13 people in 10 days). 5.7 % of people aged 60 and over living alone in Lithuania did not communicate with anyone in the week before the survey. Almost one fifth of older adults in Lithuania (18 %) have unsustainable social relationships, i.e. they would not have relatives or friends to ask for help in times of need.

Do older people living alone notice their exclusion? Our research shows that in the case of Lithuania the answer is yes. Their narratives about their membership in society have more to do with social exclusion than with inclusion. Inclusion is often even formulated negatively, as if denying the implied (culturally rooted) exclusion and showing oneself as an exception, despite belonging to the marginalised category, for example, using expressions like “I don’t ask [for anything]”, “I am not a parasite”, “I do not feel like I am somehow wacky” referring to old age stigma. The most important area of exclusion identified by the participants is the withdrawal from the labour market and the related loss of the feeling of being needed by others and the loss of social relationships.

Other aspects of social exclusion highlighted by the participants include age-related decrease in their social value and health. On the other hand, factors contributing to social inclusion would include good health, personal autonomy, day-to-day communication, work or support for others, as well as participation in public events. It is important therefore to create spaces and occasions for older people, especially for those living alone, to safely and meaningfully participate in social life with respect to neighbourhood, public transport, premises for community activities, etc. Older people should be inspired and empowered to seek social participation and self-realization via strengthening physical and mental health, encouraging others to participate. Means to foster leadership, mentoring, digital inclusion of older people, and psychological support in case of mourning could be of help. On a broader scope, education about harm of old age stigma for individuals and society, as well as about social exclusion, loneliness and isolation could boost social initiatives for intergenerational integration.

Sarmitė Mikulionienė is a Director of Lithuanian Social Research Centre, Vilnius, Lithuania. Her research interests are ageism, demography of ageing, generations, social exclusion and lifelong learning. She is a member of the EAST Network of Oxford Institute on Ageing, International Network for the Study of Intergenerational Issues. Currently, she is involved in the project “Building older people’s well-being: empowerment policies, monitoring indicators and the voice of older people”.

Gražina Rapolienė is research fellow at the Lithuanian Social Research Centre. She is a member of the working group on civic exclusion of the COST Action on old-age exclusion in Europe (ROSEnet) and was a MC in the COST Action on ageism. Examples of her publications include “Ageing Identity: Do Theories Match Experiences?” and “Old Age Stigmatization”. Her research interests: social exclusion, ageism, ageing identity, representations in media, and consumption.

← Welcoming Contraception Failure? Towards a Flexible Model of Reproductive Decision-Making
Population change in Georgia from 1990 to 2018 →